Yesterday, after reading a blog message of Dr. Craig Childress (Dr. Childress Blog) and translating it into my mother language dutch, a new world opened. It's the first time in many years I'm able to see the reason of PAS (Parental Alienation Syndrome) behind my own situation. Not only the reason became clear, but also the, so called: motivation.
Going forward, I will call this: my lightbulb moment, more information could be found at:
Wat is de achterliggende reden achter ouderverstoting
Posted by tjanssen.tom at 7:15 AM

Parental alienation syndrome (abbreviated as PAS) is a term coined by Richard A. Gardner in the early 1980s to refer to what he describes as a disorder in which a child, on an ongoing basis, belittles and insults one parent without justification, due to a combination of factors, including indoctrination by the other parent (almost exclusively as part of a child custody dispute) and the child's own attempts to denigrate the target parent. Gardner introduced the term in a 1985 paper, describing a cluster of symptoms he had observed during the early 1980s.
Parental alienation syndrome is not recognized as a disorder by the medical or legal communities and Gardner's theory and related research have been extensively criticized by legal and mental health scholars for lacking scientific validity and reliability. However, the separate but related concept of parental alienation, the estrangement of a child from a parent, is recognized as a dynamic in some divorcing families.Psychologists differentiate between parental alienation and parental alientation syndrome by linking parental alienation with behaviors or symptoms of the parents, while parental alienation syndrome is linked to hatred and vilification of a trageted parent by the child.
The admissibility of PAS has been rejected by an expert review panel and the Court of Appeal of England and Wales in the United Kingdom and Canada's Department of Justice recommends against its use, but has appeared in some family court disputes in the United States. Gardner portrayed PAS as well accepted by the judiciary and having set a variety of precedents, but legal analysis of the actual cases indicates this claim was incorrect.
No professional association has recognized PAS as a relevant medical syndrome or mental disorder, and it is not listed in the International Statistical Classification of Diseases and Related Health Problems of the WHO or in the American Psychiatric Association's Diagnostic and Statistical Manual of Mental Disorders (DSM). 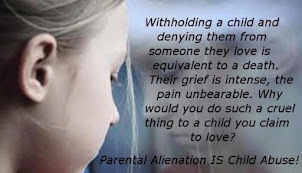